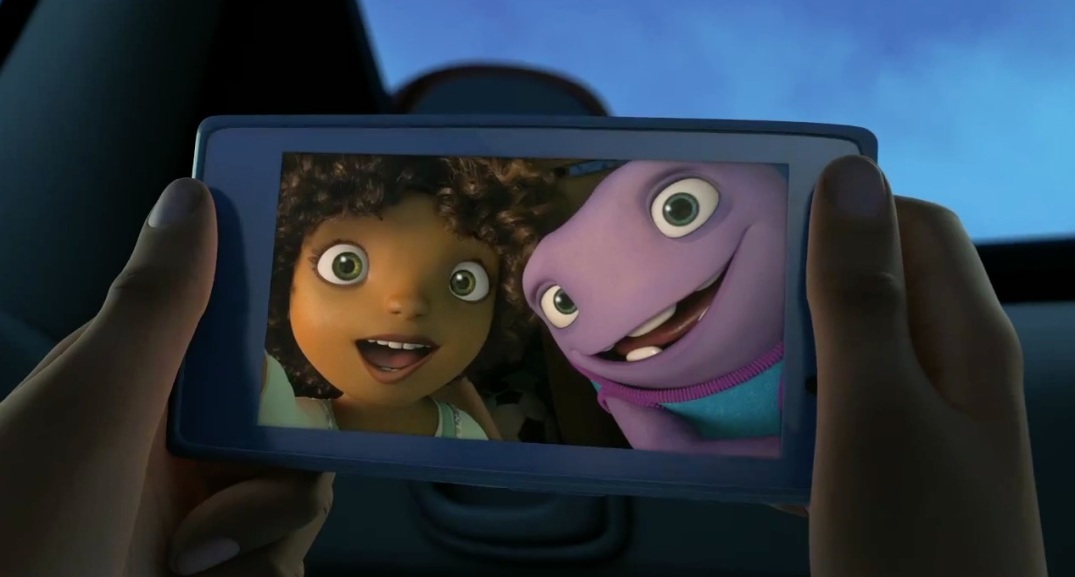 Home begins with a rather humorous account of an alien race called Boov and their mission to escape their own planet to evade a bigger and scarier race who are trying to capture themfor unknown reasons. Of course they choose earth and when they arrive, they relocate all humans to Happy Human Town and move in around the world happy as pie!

The Boov are adorable creatures whose moods are shown by their ever changing skin colour; blue for sad, red for angry etc and because of this, you feel a connection with them just by looking rather than their very naive way of think which is utterly hilarious. They have no clue, and the fact they think they know everything will tickle you in the best way.

The star of the show is the lovable loser Boov named Oh who takes center stage and immediately captures your attention. He is ridiculously cute and his appeal is further heightened by his naive take on the world as well as the unmistakable voice of Jim Parsons or Sheldon from the Big Bang Theory to all of us. His unlikely friendship with the beautiful and exotic teenager, Tip voiced by Rihanna will make you laugh and cry for the unlikely but dynamic duo and Pig the Cat. They journey around the world brings about a series of emotions that even the smallest of kids will understand.

With the addition of comedic legend Steve Martin and the ever gorgeous Jennifer Lopez as Tip’s mum, Home is a good trip out for the kids.

Despite all the goodness of the above, the film is a bit long (I went with a three year old who decided she’d had enough) and is not necessarily as funny as previous Dreamworks gems like The Croods and How To Train Your Dragon. Other than this, Home is fun and carefree and drives home the importance of family and friendship and doing the right thing. The animation is beautiful, especially with Tip’s lovely curly hair and as mentioned, Oh is just too cute. His misinterpretation of words and Yoda way of speaking are all great aspects that will make this animation a memorable one. 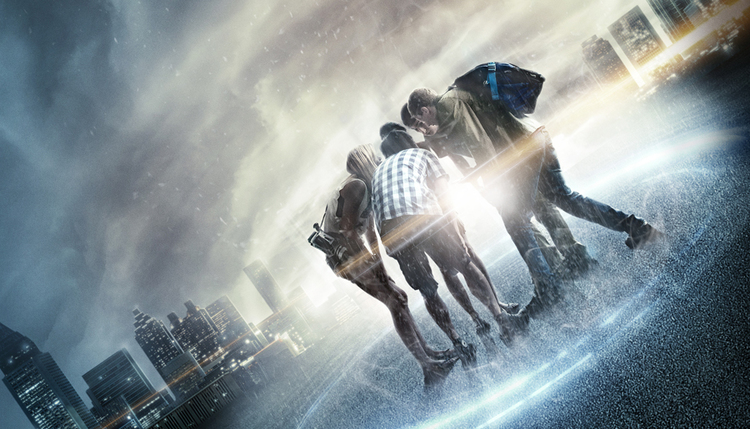 From the trailer, this looked to be a decent time travel film, but unfortunately the failure that I have come to expect from hand held camera footage films has reigned supreme.

Plot: David Raskin is a genius and while attempting to find a away to fund his tuition at MIT, he comes across an apparently failed experiment of his father’s that makes time travel possible. Cue all manner of debauchery that would enter the mind of any US teenager and we of course have winning the lottery, getting the girl and defeating school bullies.

Once the fun ends, the consequences of their actions become apparent and they realise (belatedly) that they can not play God and come out unscathed.

Considering that all of this was told in the trailer, i foolishly believed there would be something a bit more solid to hold the rest of the film together but this is not the case. There is no obvious reason as to why this experiment even exists or why it was so important to David’s father and therefore makes the damage seem avoidable and quite frankly, rather stupid.

The effects are minimal which is totally fine, but how they get to and from the times they do is not fully explained or I just did not get the grasp of it. Electromagnetic waves were in there somewhere but there was no clear way that they actually were able to get back.

What could have been a decent and possibly very dark thriller about messing with the unknown, turns into an all American bubblegum high school film that focuses on a nerd trying to get a cheerleader (figuratively). It was too long, scenes were so long they became pointless and the only saving grace for myself was the fact that the main guy was quite cute! You know I love me a cute guy people!

Needless to say, I was disappointed. Other than the appreciation of a very smart kids who could feasibly put together a time machine (given the appropriate schematics of course), there was very little else to set this film apart from various time travel film predecessors.

The conclusion was lacking for me as there was no real climax and you found yourself having done a complete 180 and not really bothered why.

Needless to say, the cinema last night was a packed one as me and my fellow movie goers got settled in for the newest instalment to the X Men franchise. Before I continue however, I must point out that although the film is good and enjoyable, it is unfortunately a bit of a let-down.

Forget what you thought it was going to be about because you’d be wrong. What could have potentially been a very exciting story about pasts meeting presents and futures and all manner of unexplainable time travelling rules; ended up being a story loosely strung together to make Wolverine once again the centre of attention.

Do not get me wrong, I adore Hugh Jackman and all that he has done for Logan/Wolverine and the X Men films but at what point do the other characters get their screen time? This was a great opportunity to get some real depth out of the characters that we had done with X Men: First Class but DOFP failed miserably in that regard. Although new faces were introduced, it seemed to only be for shock value rather than any real significance. Powers/mutants once again went unused and in some cases overused to create visually stunning effects but not so much so for the overall substance of the film. For an X Men film, it’s sad to say that the best bits are in the first five minutes but then falls into a steady decline of anything worth writing about. The end provides a certain sense of sentimental value but other than that I was left wanting. Not that this is a compeltely bad thing since we all know that there will be another instalment, X Men: Apocalypse, where the other mutants may make a more worthwhile appearance.

James McAvoy and Michael Fassbender reprise their roles as Professor X and Magneto respectively and do so amazingly. As I’ve found with most of the X Men films (feel free to disagree) there is not much lost in the way of casting and acting but how the characters are executed via the storyline. There is too much left unsaid and there is no change in this instalment. Jennifer Lawrence although very kick ass in this film as Raven/Mystique doesn’t really do it for me as much as Rebecca Romijn did in the first three films; once again feel free to disagree. The biggest confusion of them all though is why Storm (Halle Berry) is even in the films anymore having said all of three sentences throughout the entire film.

Needless to say, I didn’t hate X Men: Days of Future Past but I wasnt swinging from the rafters about it either. There could have been so much more in the two hours and ten minutes that was unfortunately not delivered which made it feel incredibly underwhelming.